The Tree Sparrows  (TS) are doing better each year at the Clifton Tree Sparrow Recovery Project, our only known breeding site for the species in Calderdale. Several boxes (about 11) have TS nests. We’ve noticed this year that they are now using some of the boxes on the two large oaks, one of which is above the fishing-pond, and one on the near side of the pond when looking from the road; a new observation. The box on the big oak in the lane, furthest away from the cottages (box 1) has again been used by TS as usual.
One very low box only a few metres from the feeders in the hedgerow was used successfully by TS this year, though one juvenile died at the RF (Ready to Fledge) stage.

Other species using the boxes are Great Tits Parus major and Blue Tits Cyanistes caeruleus, (3 of each.) There are about 55 boxes, mostly numbered, though the numbers are not always visible. The highest boxes on one of the oaks are not numbered.

On 23rd June four boxes in a row on trees in the cottage garden had occupied TS nests. The young were at various stages from FS (feathers on wing short) to FL ( feathers long,) and brood sizes were two of 4, one of 3 and one of 5. They are very likely to have two or more broods in the season.

Tree Sparrows are in the eves at another group of cottages in the area, just over the fields, (Mike Stead), but the residents prefer not to have bird watchers peering up at their windows.

House Sparrows have been seen at the site, and it looks like they have bred there this year, as two fledglings were huddling together on the lawn on 23rd June. They are unlikely to use the boxes, as they prefer a bigger hole, but may be ousting TS from the holes under the eves.

We noticed that at least one Rook Corvus frugilegus  had learned to cling onto the feeders, so Jane Uttley deftly fixed plastic garden mesh round, which lets small birds in. Jane orders large sacks of golden or golden/white millet which, surprisingly to me, is grown in UK. Our initial grant for the project ran out some time ago, and Calderdale Bird Conservation Group are now paying for the seed. We have a rota to go and top-up.

This encouraging news about TS numbers has been heard from various parts of the country. Yorkshire Naturalists Union Bird Report for 2011 says there has been a 58% increase in England since 1995.

Other sites at which TS used to be seen were at Cromwell Bottom Nature Reserve, and at North Dean Woods (breeding in the old quarry – the late Frank Murgatroyd ) and in the railway viaduct over the River Calder at Salterhebble ( 1 nest in the early 90s – SB.) So they might reappear here soon. 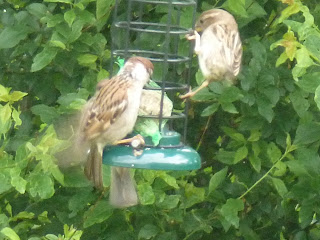 A female House Sparrow (right) at the fat feeder with Tree Sparrows
(Passer domesticus and Passer montanus.)
Male and female Tree Sparrows have no plumage difference. 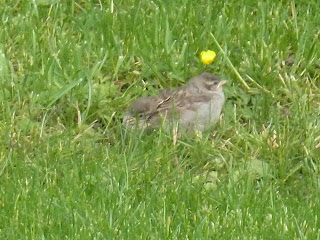 Two recently fledged House Sparrows. (Juvenile Tree Sparrows have some of the head-markings of their parents.) 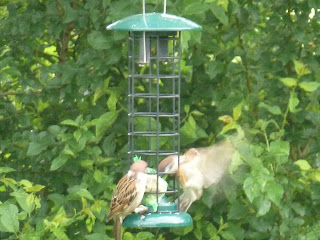