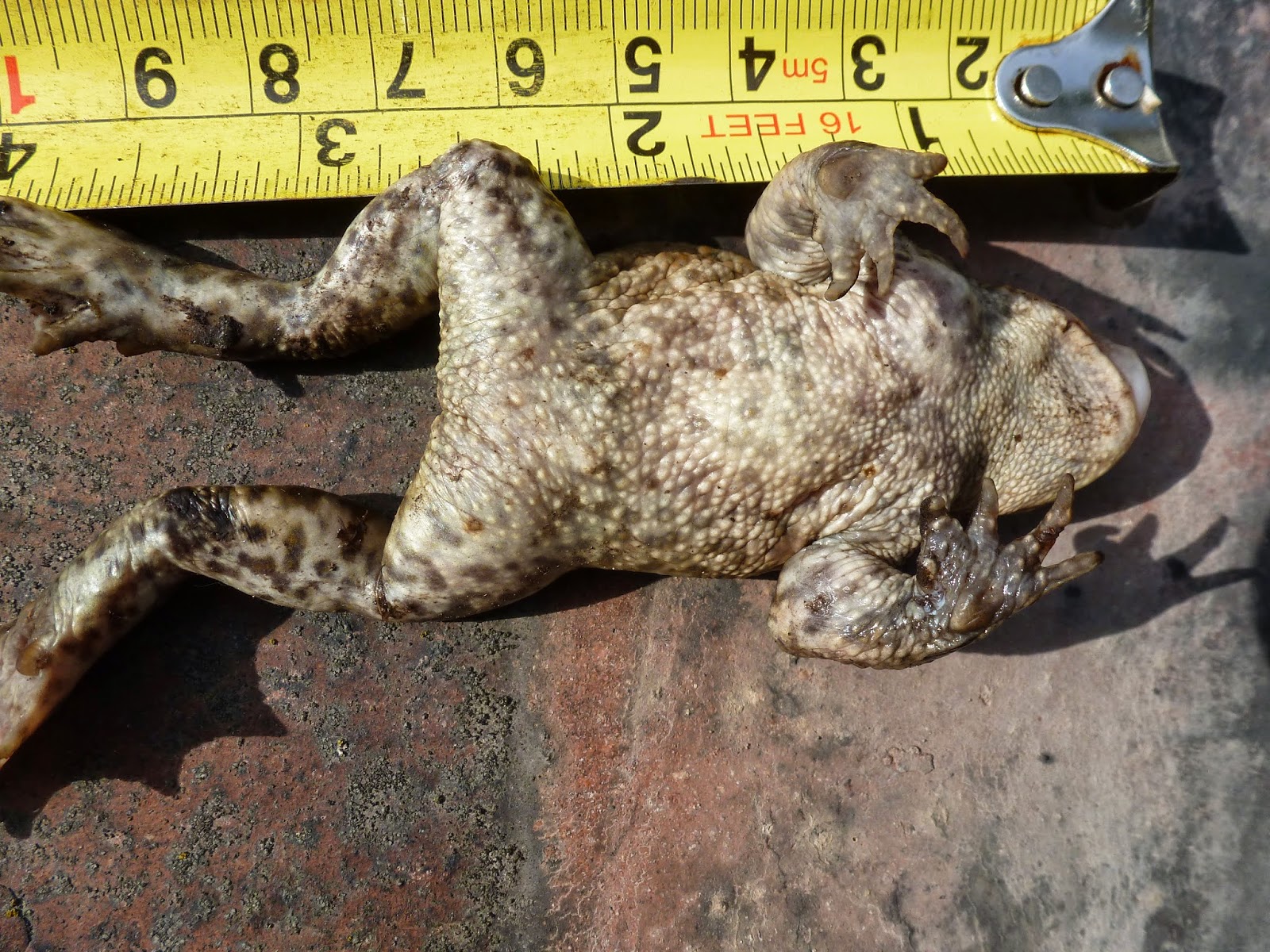 While helping toads across roads on toad patrols I have often looked for the tubercles the literature describes on the male toads’ “hands”. I’ve never been able to spot them in the outdoors, by torchlight, and a live toad is so squirmy and uncooperative.
So I looked among the unfortunate road casualties for an obvious male by size and shape, and found this one that had been hit and killed quickly without being too squashed.
The whitish underside with dark freckles is diagnostic of a Common Toad. Frogs have unspotted bellies. 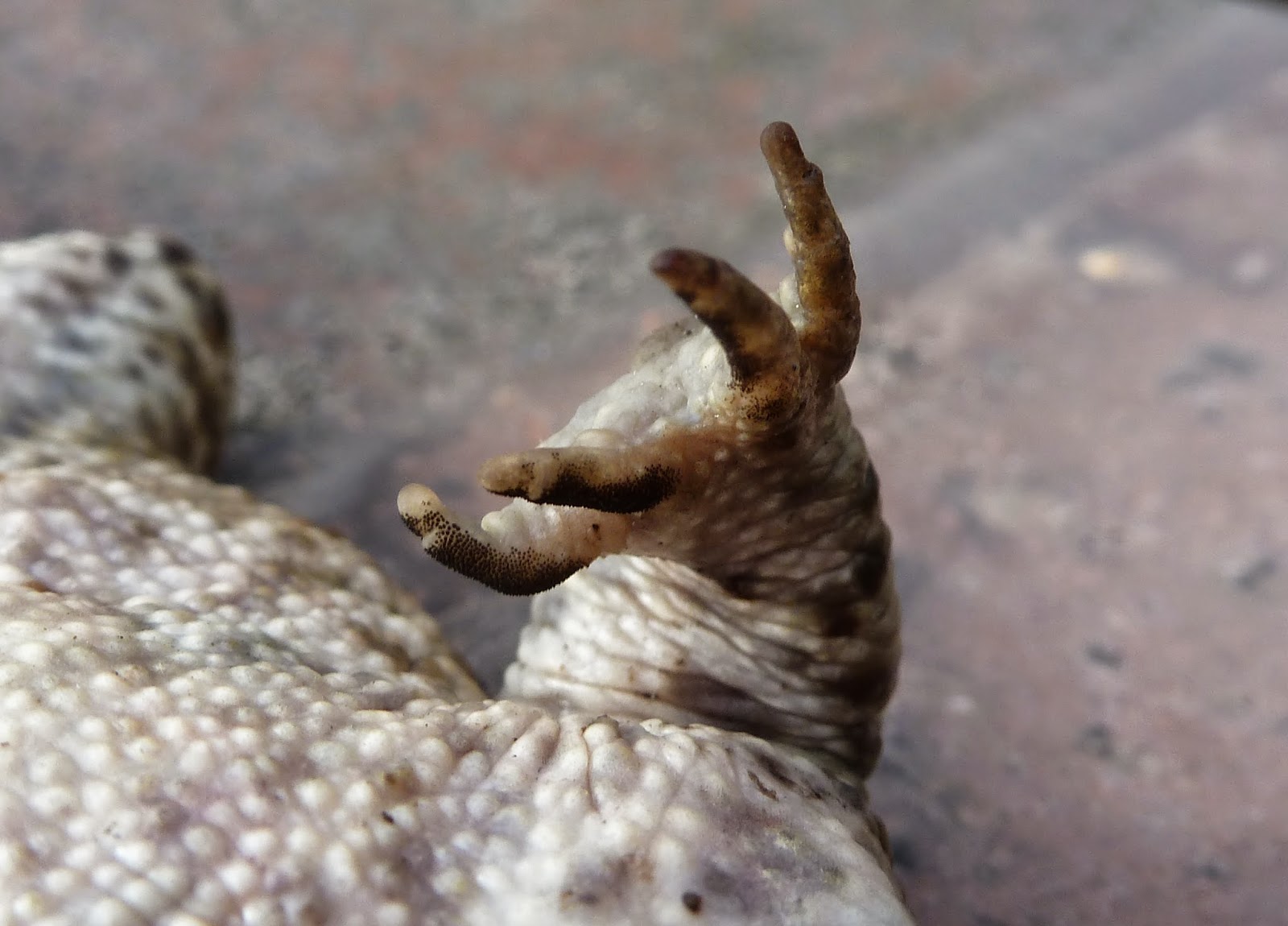 In good light the day after, and with an 8x hand lens I saw them easily.
My compact Panasonic camera picked them out quite well. They are tiny black shiny raised spots. The skin remains pale between them. 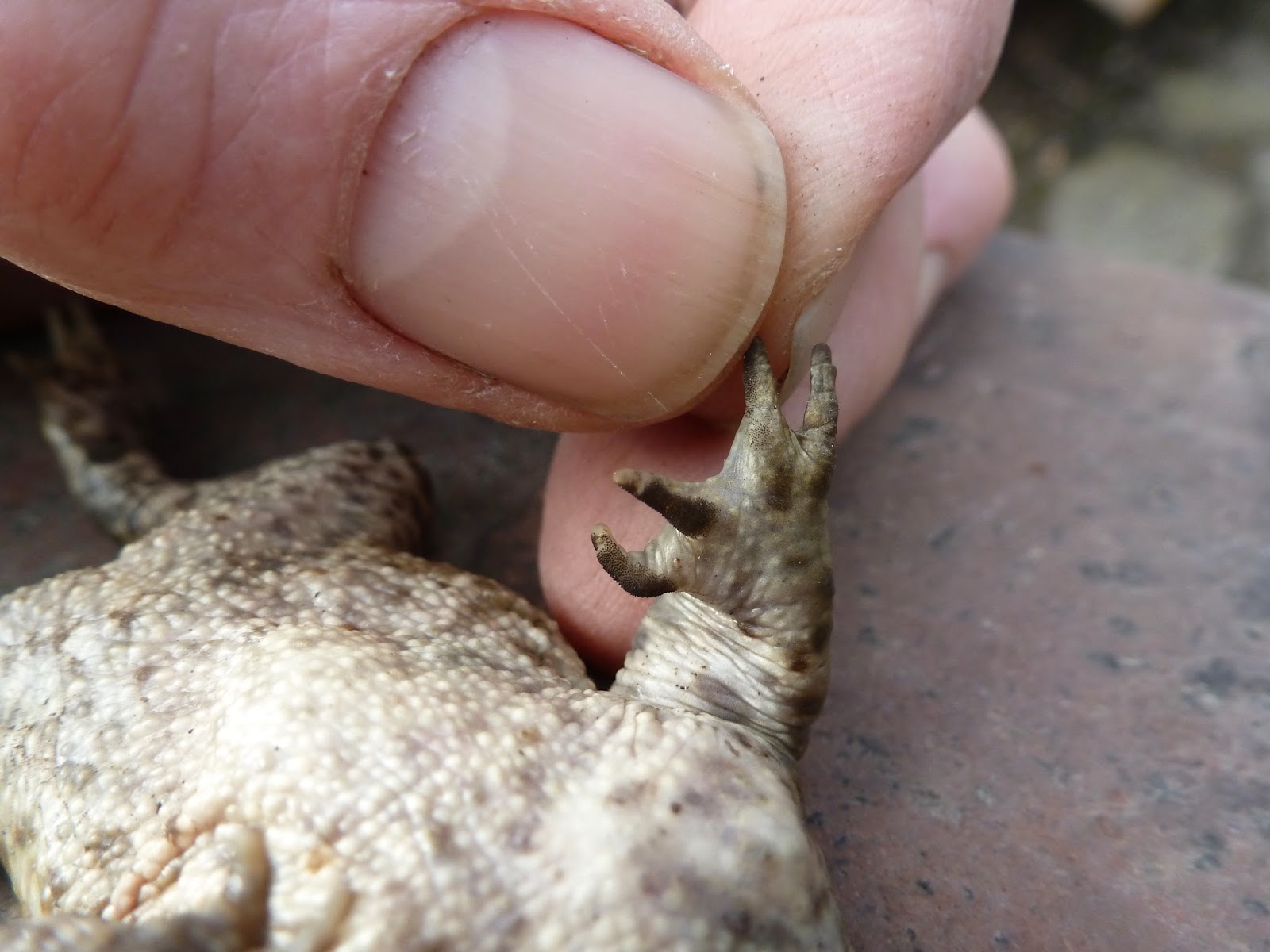 During the breeding season the males develope these tubercles to enable them to get a strong grip under the female and just behind her front limbs and enables him to resist being pushed off her by another male.
Much squeaking (it can’t be described as a croak) of different pitches goes on as  rival males attempt to usurp the first, who in turn kicks out with his back legs to push them away. 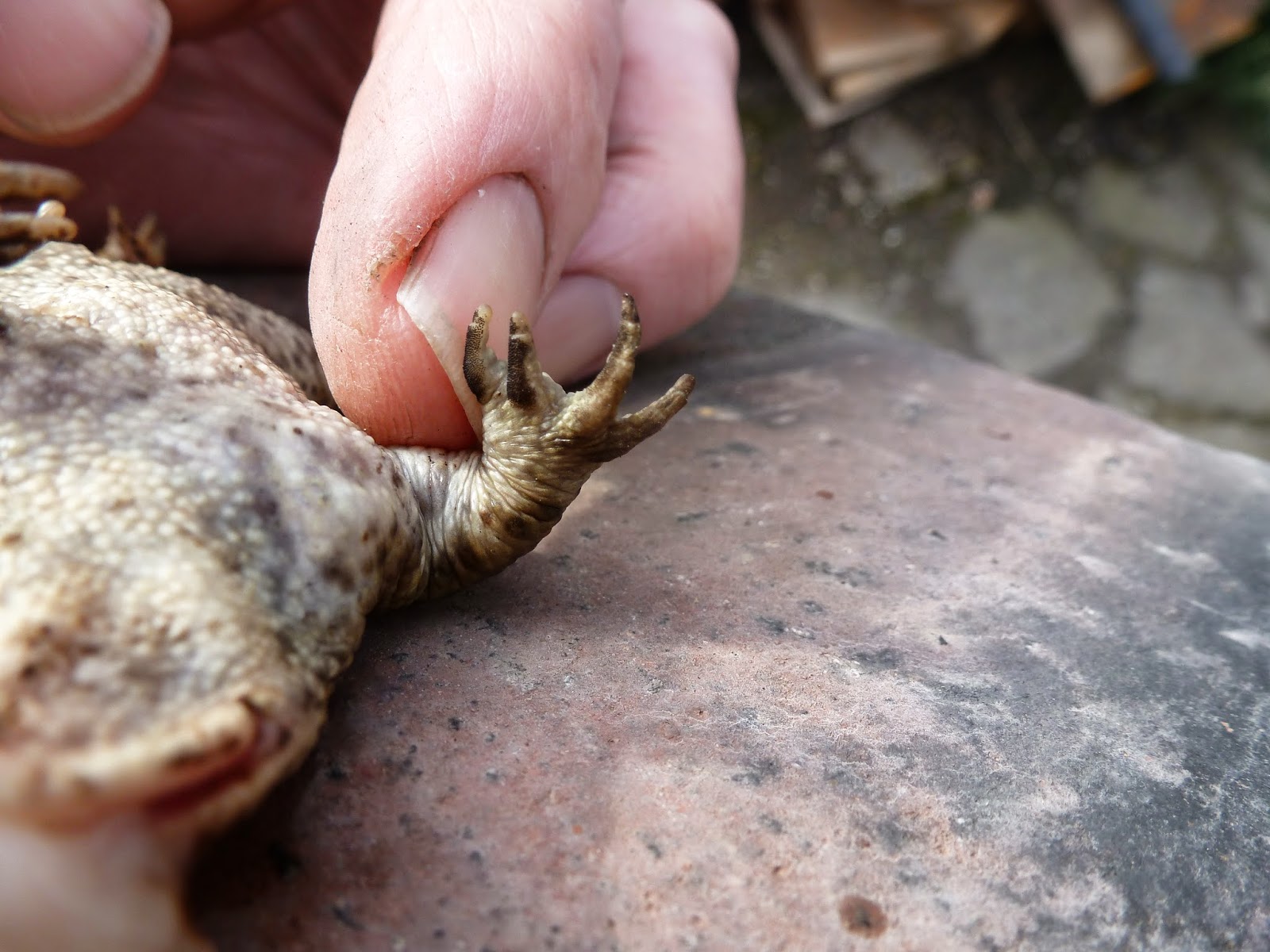 The tubercles are on the top side of the male’s hands, on the first three digits from the inside out.
They are on the top side because he grips round from the back of the female but doesn’t twist his “hands” at the wrist as, for instance, humans usually do when gripping another human from behind whilst dancing the Conga. 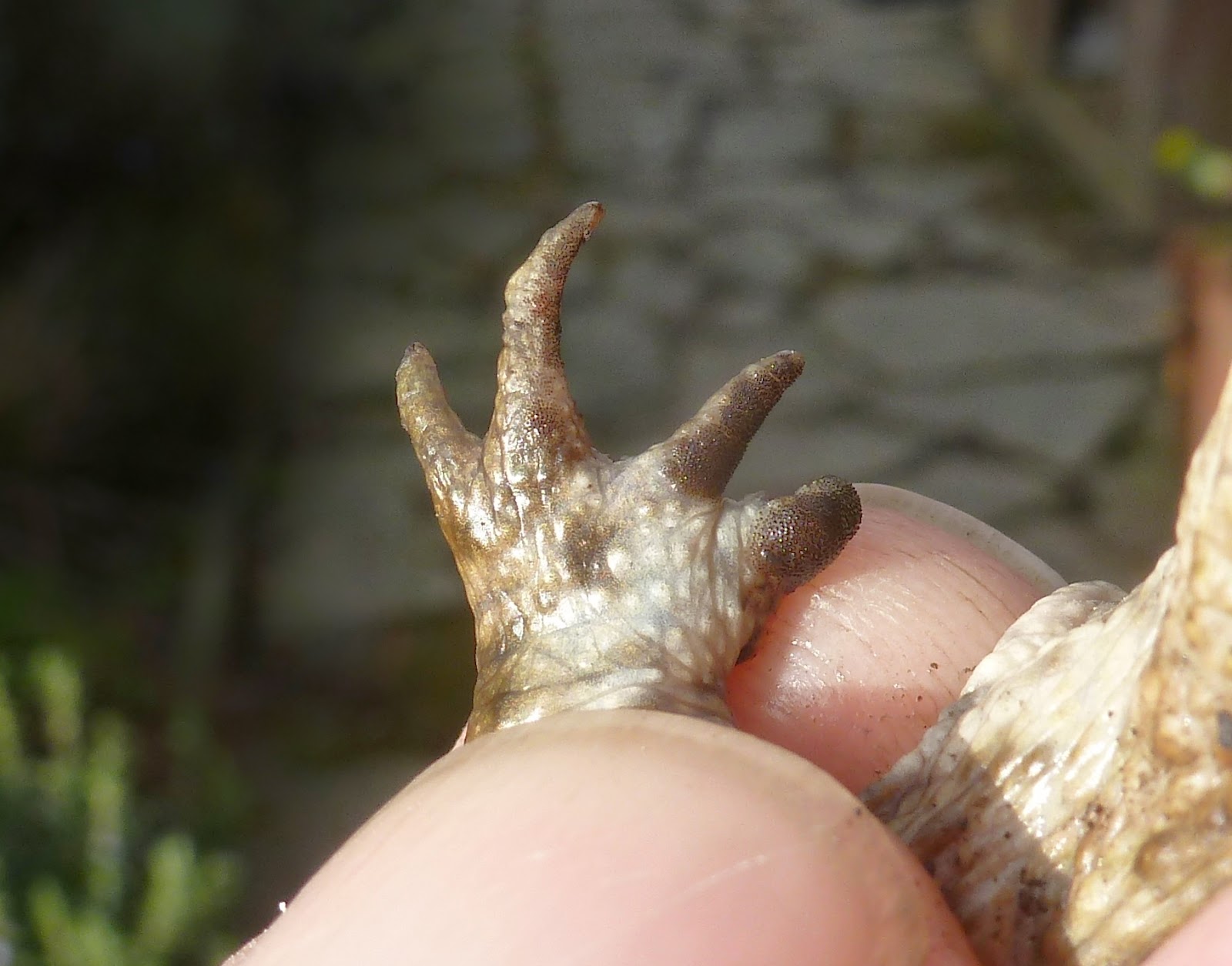 Top of left front “hand”. Click on picture to enlarge. 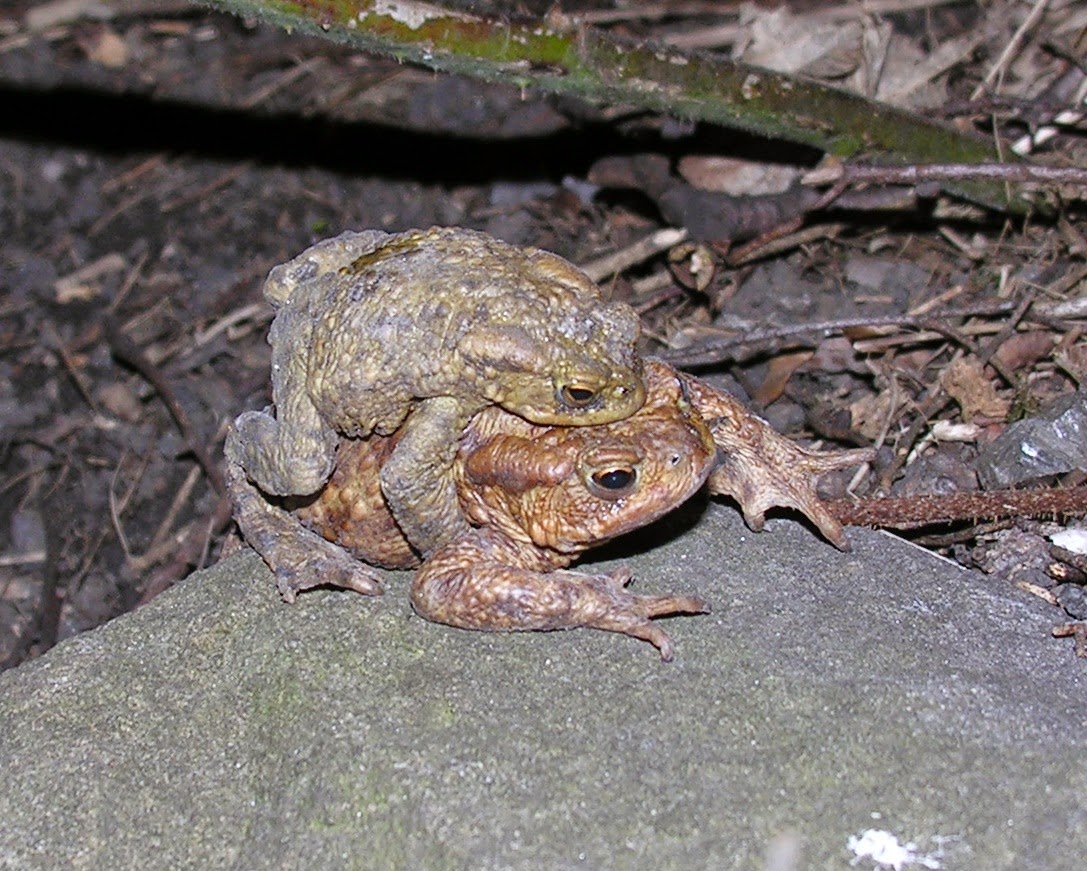 Common Toads Bufo bufo in amplexus, (above) the male travelling to the breeding pond on the back of the female.
Other toads such as the native Natterjack and frogs also grip from behind in amplexus, but I am not aware of the males developing these tubercles.
Obviously I scrubbed my hands thoroughly after handling a dead animal like this. I always stress that toad patrollers should wear gloves whilst picking toads, etc, off the roads. The season has finished for 2014.
Pictures Copywright Steve Blacksmith 2014 but may be used quoting
Halifax Scientific Society in not-for-profit media.