Though only one birder reported a small breeding colony, there were a few passing groups of Twite in small numbers, at Swalesmoor (above Boothtown) and Soil Hill (near Ogden) notably. (per Dave Sutcliffe.)

The RSPB did not organise monitoring of breeding colonies using volunteers this year.

Charlotte Weightman, for the RSPB, continued with the reinstatement of flower-rich meadows project in Calderdale, as in previous years, appealing desperately for volunteers to help complete the seeding of the last fields in between the copious rain of this wettest year on record for England and Wales. Well done to Charlotte and her asistants! Sorry I never got round to lending a hand this year. 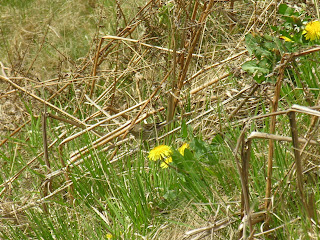 Male Twite at Rishworth in April 2011. Would  anyone like to  provide a better picture?

Unfortunately the spread of ryegrass monocultures in Calderdale continues. I notice it particularly in the Greetland/ Stainland Dean area, which could be all down to one wildlife-blind farmer. (They often rent fields at distances from their home farm.) Are there any other black-spot areas  for Twite, flowers and insects anyone has noticed ?

I was invited to monitor Moselden Head Quarry by Marshalls (Hx) Ltd for Twite as they were about to resume quarrying. In 7 visits from March to August I confirmed only one singing male on a wire near the entrance to the quarry on 24th April.

The fields over the road from the entrance are planned to be upgraded for flowering plants to help Twite, though they already support a great many dandelions. This land is owned by Marshalls who have consulted Natural England. Several times flocks of up to 40 Carduelis sp. could be seen and heard feeding here in the mist and rain, but were thought to be all Linnets. I did this as a voluntary job for Marshalls.

Numbers built up at one site in Calderdale, (Derby Delph Quarry,) to about 100 Twite in October. This was to feed on niger seed provided for them. They seem to use the site as a pre- and post-breeding gathering area, according to Tim Walker, who provides the seed and monitors birds there. They must have had a pretty OK breeding season, just as the Tree Sparrows did at Jay House lane.