The weather was kind to us on the monthly Scientific Society ramble, with the views enhanced by pools of sunlight versus shade in the distance. Dark sweeps of cloud lent Hughesian or Bronte-esque drama to the Pennine scenery. Birds seen included a Peregrine, 2 Kestrels, a Buzzard mewing as it soared above one of the Kestrels on Shackleton Knoll and 8 juvenile Linnets together on wall tops in upper crimsworth Dean.

Loads of other happy walkers were around including a big group from Staffordshire, who “lapped” us twice; once in Hardcastle Crags and again on the Aire-Calder Link path going over the top to Crimsworth Dean.

After that on 23rd Sept. there is a half day visit to Hoofstone Heights, the highest point in Calderdale, with an enigmatic rock carving, plus a stop at Bridestones, which also have historical, geological and climate-change aspects to explore. (Wind erosion during an ice-age when they were not covered.) Meet 10.30am for 10.45 start Mytholmroyd car park. (Next to Russel Deans Furniture SE014260.) This walk isn’t in the schedule. Leader – me, but Dave Shepherd the archaeologist has promised to come along if he can.

The walk over the peat up to Hoofstone Heights from  Long Causeway above Todmorden is wet and boggy, but with no really sticky quagmires. Some peatland restoration has been attempted recently so we will be able to see the early results of that. 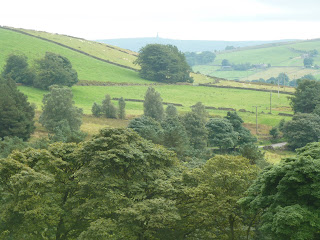 Stoodley Pike in the distance – both pics in Crimsworth Dean 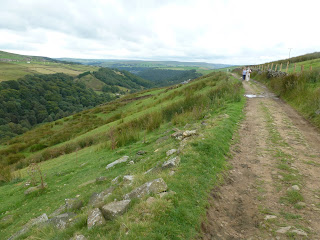 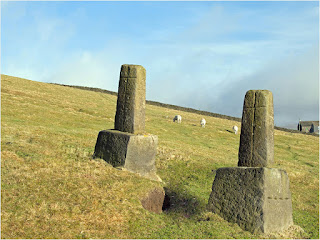