At work today I happened to look up and saw a tight flock of what I at first assumed were Starlings fly between trees at the St Augustines Centre.       I looked to see which berries they were coming for ( there are Hawthorn, Whitebeam, Cotoneaster and Berberis available.)

Then I noticed the unmistakable wispy crests on their heads ! There were about 15 of them and they soon departed over the terraced houses. One of them has been ringed. 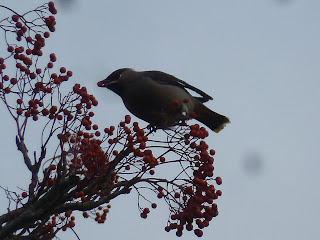 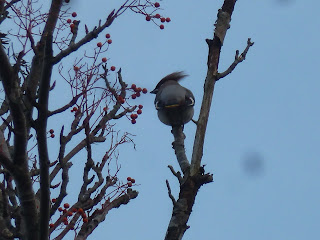 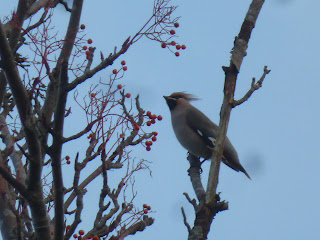 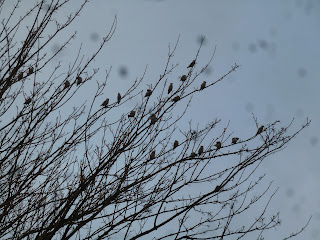 On leaving at lunch-time I met Dave W. in Lightowler Road round the corner. He had gone to the wrong place from my directions on the grapevine but struck lucky and we were able to watch at our leisure 20 odd Waxwings in the sunshine. (Lightowler Rd./ Hanson Lane junction.)

Andy H. has since found them or others in the same general area.

It is surprising what a rich bird life exploits these little patches of greenery in town. Today up there I also saw Long-tailed Tits, Blue Tits and two Goldcrests. I have had a Grey Wagtail in the gardens. 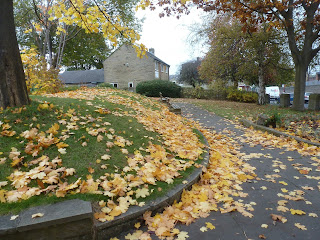 No birds in the picture !

Breeders are Blackbirds, Dunnocks, Robins, Collared Doves, Magpies, Crows, Blue and Great Tits, and a Sparrowhawk has finished off a Feral Pigeon between the cars in the carpark.

I once found a large raptor’s tail feather (possible Buzzard) in the car park, but on reflection, it probably fell out of someones door-pocket . . .