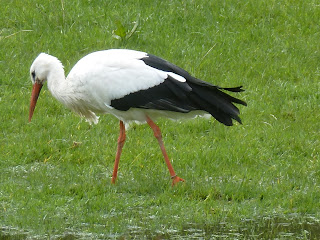 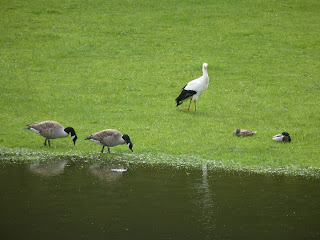 Dave Wilson of the Countryside service first reported it and Hugh Firman passed it  on. The small metal ring on its left “ankle” is not the usual scientific ring. Those are put above the main joint and have a number large enough to read with binoculars. We have yet to hear if it is a wanderer from Harewood Bird Garden, the other side of Leeds. Some research needed there.
Whether it was from there, or a genuine migrant on its way back to, say, Sweden, it probably arrived as a result of the easterly airstream we have had. The field it was in was next to the local heronry (about 6 or 7 nests along the riverside trees,) so a wandering bird could have been tempted down by the sight of large nests, a bit like its own.
It was finding lots of food, including at least one, possibly two, frogs. I have videos of it eating these, but my system doesn’t want to upload the videos to the blog.
While we were there, a pair of crows attacked and ate one of a pair of mistle thrushes also in the field. Whether they were newly-fledged I didn’t notice, being absorbed with the stork. I saw a pair of crows kill and eat a fledged young blackbird in a field at Mill Bank once.
Jeff Cox got a great shot of the stork taking flight – see Calderdale Bird Blog.﻿
﻿